The problem of searching energy sources, which are able to provide power supply in an autonomous mode, is very real. Using a principle of direct conversion of thermal energy into electric energy enables us to solve this task. Among the known systems which use this principle (thermal emission, thermoelectric converters and fuel elements) with an electric power up to a large number of kW, long active life (more than 10 years), high reliability, and independence is presently only available with systems with thermoelectric converters. That makes them the best choice for use as autonomous current sources as well as current or heat sources.

The operation principle of these installations is based on the Seebeck effect. A thermoelectric battery (TEB), which is designed and built with a temperature difference on opposite ends, generates the direct electrical current. It is formed from semiconductor thermoelectric alloys.

The cylindrical elements with radial heat transfer combine well with the pipe heat exchangers, which are widely used both in nuclear power and thermal technologies. Higher specific energy characteristics are archived in cylindrical constructions by virtue of weight reducing of design elements that generate a heat match between thermo-elements and heat supply and release facilities.

In addition, the cylindrical thermo-electric generator, which is designed as a pipe heat exchanger ensures high electrical insulation resistance. The pipe shaped thermoelectric batteries, as a rule are radial-ring. They are comprised of thermo-elements formed as ring sectors, which are switched along external and internal surfaces (figure 1).

Using specific approaches and a switching circuit achieves a heat resistant TEB construction. Reactor trials during 20 years, using an organic fuel thermoelectric generator, have confirmed its serviceability. The heat resistance up to 1300 heat shifts has been confirmed by the bench tests. The TEB with this type of construction was used in an installation to provide electrical power and heat to the electrolytic protection systems, telemetry and radio relay systems arranged along gas mains. This installation has been successfully maintained. 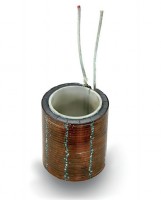 The Thermogenerating battery is intended for converting thermal energy into electricity ( via the Seebeck effect). The TB is a finished product and it is used for manufacturing self-contained sources of electrical supply. It is designed using a unique technology of closed circuits from semi-conductive material. The TB electric commutation is provided without using ceramic substrate both on hot and cold sides.

Maximal temperature on the hot side is 340° C. 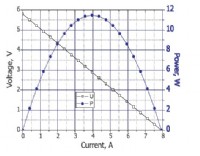 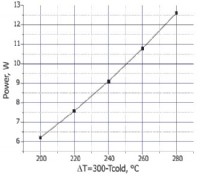 The eMF is the circuit break voltage.

This power is received at load resistance is equal to the internal load of a battery.

Output voltage and power change according to the value of external load and relevant current (pic.1). Load resistance   is equal to internal resistance of battery corresponding with maximal power. Output electric power is strongly dependent on the value of temperature difference (pic.2).

Under "Settings" you will find detailed information about the cookies used and you can manage them yourself.

You can find more information about your rights as a user in our Data protection declaration.

Here you can view or change the cookie settings of various tools that are used on this domain.
(An * indicates a possible prefix or suffix.)