The thermo-generator operation is based on Seebeck effect, which was discovered in 1821 and found practical applications in current sources used for researching galvanic processes as well as different electrical processes and effects. The practical application of thermo-generators was developed in the 1950s as self-contained current sources used in districts which lacked centralized electricity supply. Rapid development of thermo-electric energetics began at the time of space exploration. Until then they used radio isotopic thermo-generators in space ships as current sources. At the same time, they were used for electrical supply of cathodic protection of main gas pipeline.

The thermoelectric gas generator (TGG ) is a power supply of electric energy, which it generates by thermoelectric conversion, based on the Zeebeck phenomenon, at the expense of direct heat conversion, received by fuel combustion, into electric energy. TGG -150 intended for direct current supply of radioelectronic devices, complex, linear telemechanics and automatics, communications and cathode protection on trunk line gas pipe lines, on objects which lack standard power supplying units, but with available natural gas. 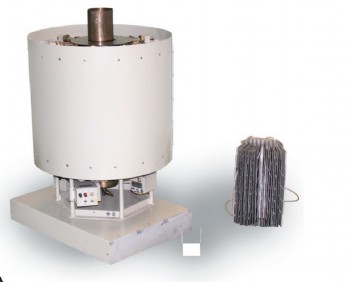 The thermoelectric self-contained current source (AITT – 500G) is intended for self-contained power supply of electricity consumers, and has parameters compatible with characteristics of the specific assembly. Electrical energy is generated by a thermoelectric generator with thermal energy conversion. Consumers of electrical energy are cathodic protection systems of main gas pipelines, technological systems, field gathering systems and gas treatment and etc. The primary energy source for AITT – 500G is natural gas, flowing to the assembly from high pressure main gas pipeline ~ 100 atm. The AITT – 500G is a product of many repeated cyclical applications, which is repairable and rebuildable. The assembly fits in protection container in vandal-proof protection with a ventilation system and a fume-collecting chimney. 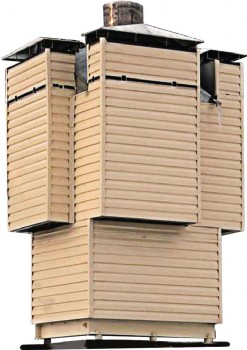 climatic performance UHL1 can be adapted to operate in the regions of the Far North).

The camp thermoelectric generator «POT» PTG -40-DC is intended to receive electric power in camp conditions by heating it with water over a fire or any other heat source.

The operating principle of the PTG -40-DC is based on direct conversion of thermal energy into electrical energy on the basis of the Seebeck effect. Electric power is generated by thermoelectric batteries, containing semiconductor elements. Thermoelectric batteries generate direct electrical current when a temperature difference between hot and cold sides is provided.

The PTG is easy in use. To receive electrical power it is necessary to fill water in pot and place it on a fire (or fix it on a support). The supply of electric devices by direct voltage 12V is done through a plug, which is located on control unit cabinet of the PTG.

The supply of electric devices by alternating 220 voltage is done through a converter socket DC/AC , which is included in the PTG supply set.

The product «POT» enables you to prepare not only fish soup or boil water but at the same time provides electrical supply to the following electricity consumers:

Generator is a crash proof and ecologically clean product. There are no flammable materials in PTG and it makes this product flameproof and reliable. 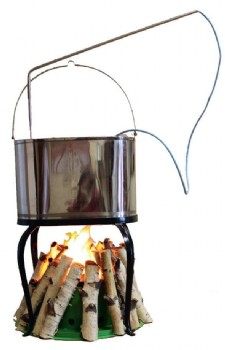 The thermoelectric generating assembly is used for self-contained electrical supply of devices, conditioning systems, batteries, lighting and etc., in any climatic zone regardless the presence of other electrical power sources.

The operating principle is based on conversion of thermal energy into electrical energy on the basis of the Seebeck effect, which means occurrence of electromotive force (thermoelectric electromotive force) in the electrical circuit, consisting of a series of connected semiconductors p-type and n-type, contacts which are set up at different temperature modes.

Direct heat conversion into electricity utilizing the Seebeck effect. Due to the temperature drop across the cold and the hot side of the thermoelectric module, thermoelectric couples arranged in series generate direct current.

This self-contained current source can be used as a supply of the electric devices, devices for communication systems. Also this appliance is good at battery charging and can be used for lightning.

Water can circulate either in a closed or open circuit configuration. 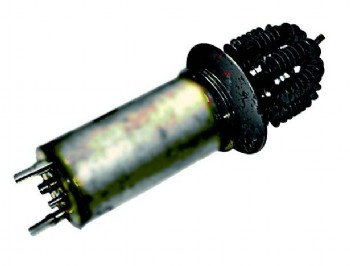 Under "Settings" you will find detailed information about the cookies used and you can manage them yourself.

You can find more information about your rights as a user in our Data protection declaration.

Here you can view or change the cookie settings of various tools that are used on this domain.
(An * indicates a possible prefix or suffix.)